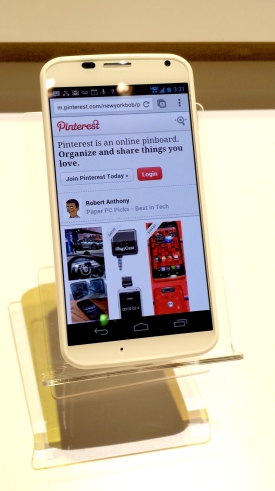 The affordable, yet sophisticated Motorola Moto X succeeds in making life with a smartphone as simple, colorful and touch-free as possible, but until recently it stumbled with one of the most basic of all cell phone accessories: wired headsets with microphones.

Fortunately, a new Moto X system software update cleans up the glitch, allowing these headsets to work as they should. The free update is now being pushed out to AT&T and T-Mobile handsets. Moto X owners can wait for the notification screen to pop up or scroll through the phone’s settings to the “About Phone” section, where they can manually initiate the update.

When a Moto X with the original system software was tested with apps such as Skype and voice recorders, it often failed to recognize wired headsets with built-in mics. The earpieces would go silent and the mics wouldn’t transmit audio.

To see if your Moto X still has the original system software, download Skype and try this: Plug a wired headset with a mic to your Moto X and make a voice call to the “Echo/Sound Test Service” entry that’s preinstalled as a contact in Skype. Once connected, try to listen to the automated recording and try to record your voice when prompted.

If you have the original system software, you won’t hear and thing and won’t be able to make the recording. Try the call again without the headset–Skype should work fine. Skype and Motorola public relations representatives were contacted for comment about the wired headset problems; neither responded.

A Moto X which once failed the Skype test now works perfectly after the five-minute software, which also cures other Moto X issues, was installed.

The wired headset problems were ironic since the Moto X, which has three built-in microphones, actually works very well with voice-activated apps such as Google Now since one of the mics is used for noise cancellation. With the new software update, the Moto X becomes an even better value.

Overall, the Moto X is a remarkable smartphone with good looks–which can be customized–and quality high-end features like a sharp, 4.7-inch display and a 10-megapixel camera. (Click here for full review).

Motorola’s Moto X smartphone is an admirable balance of style and usability. It doesn’t try to outdo Samsung, Apple and others in the race to squeeze in as many high-tech features as possible but instead aims to please with its hand-shaped curves, cool voice-activated features and touch-friendly camera.

The Moto X succeeds as a sophisticated mainstream smartphone but is no speed demon. Its user-friendliness and simplicity are apparent from the start: Instead of a cluttered home screen, the Moto X offers pretty much a plain vanilla Android home screen that allows the new owner do the customizing. And that’s not surprising since Motorola Mobility is now a division of Google, the maker of Android software.

To start the camera, you pick up the phone and twist your wrist twice–that’s it; the Moto X immediately switches to camera mode. To take a photo you can touch any part of the screen–there’s no need to hunt for a shutter button. The Moto X’s 10-megapixel camera uses Motorola’s ClearPixel technology, which allows each sensor to gather 75 percent more light, thus making it possible to get clear photos even in low-light situations. according to Motorola.

The Moto X can be customized with numerous color combinations for its keys and shell (including an all wood case available later this year) by ordering the unit via the Moto X website, which only offers AT&T units at the moment. Since the Moto X is manufactured in Fort Worth, Texas instead of somewhere overseas, online buyers can expect to see their new phones–already initialized with their Google accounts–in four days or less, according to Motorola.

Motorola’s Moto X can be ordered in a variety of color combinations.

“We think this represents a very interesting future,” said Rick Osterloh, senior vice president for product development at Motorola during a press event in New York. He said the Moto X is aimed at “the mainstream user,” not the feature-frenzied geek.

The Moto X uses what computing power it has fairly efficiently. It runs Android version 4.2.2 and has a dual-core 1.7GHz Snapdragon processor. Other top-shelf smartphones like the Samsung Galaxy S4 have quad-core processors, but they also have more sensors and higher-resolution screens, making the additional processor muscle necessary.

The Moto X is built with what’s called the Motorola X8 computing system. It’s a set of eight processor cores assigned to different tasks. Why is this important? By using different cores for different tasks, the entire processor doesn’t have to be awake all the time–each core wakes up as it’s needed. This design extends the life of the Moto X’s 2200 mAH battery to a full day of average use, according to Motorola.

Two of the processor cores are used for basic application processing (this is what makes the Moto X a “dual-core” smartphone) and four are used for graphics processing, thus speeding up video and photo functions. The other two cores take care of voice commands and sensors like the accelerometer and the ambient light sensor and help the Moto X detect how fast you’re moving and what you’re doing with the phone.

When tested with voice commands, the Moto X worked very well and was able to verbally answer questions about the time, the weather, directions, baseball scores and many other queries. The quality of the speech detection is aided by the phone’s three microphones, which work together to cancel stray noises and enhance voices.

A useful Active Display shows notifications in a simple, low-power mode, thus letting you know if you have incoming e-mail, text messages or other items even when the phone is in standby mode.

Motorola tried to snatch the smartphone headlines from Apple and Samsung Wednesday by introducing three robust additions to its Android lineup: The muscle-bound Droid RAZR HD and Droid RAZR MAXX HD and the affordable, but still power-packed Droid RAZR M.

“I’m here to tell you that the new Motorola starts today,” said Dennis Woodside, CEO of Motorola Mobility, now a part of Google. “In many ways, Google and Motorola have only just begun.” 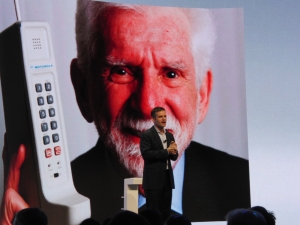 Motorola Mobility CEO Dennis Woodside talks to the press as the image of Martin Cooper, who led the Motorola team which invented the mobile phone in 1973, looms behind him. Cooper was in attendance at the New York press event.

Motorola’s three new RAZR models offer 4G data speeds via the LTE network from Verizon Wireless, long-lasting batteries and are the first to ship with Google’s Chrome for Android Web browser, which has a handful of finger-friendly features.

For example, to switch between tabs on Chrome you simply swipe your finger from one side of the screen to the other. A swipe to the side also gets rid of a tab while you’re looking at a group of them. Users also have the option of synchronizing bookmarks with Chrome browsers on other devices. Unlike the standard Android Web browser, Chrome has no limits on the number of tabs you can have open at once.

According to Motorola, the Super AMOLED displays on the Droid RAZR HD and Droid RAZR MAXX HD have 78 per cent more pixels than the original DROID RAZR, resulting in a sharper, smoother-looking display. The key difference is that the Droid RAZR HD, available in black or white, comes with a lithium-ion battery which provides 24 hours of battery life while the thicker RAZR MAXX HD (black only) has a larger battery which promises 32 hours of phone use per charge.

The Droid RAZR M, which is available in black or white, has a 4.3-inch Super AMOLED screen and a narrow bezel, which allows it to offer the same size screen as phones with larger bodies, including the original Droid RAZR. Its 2,000 mAH battery provides 20 hours of battery life, according to Motorola. The new RAZR phones also offer power-management controls that can further enhance battery life.

Like its larger siblings, the Droid RAZR M has an 8-megapixel camera on the back but has a lower-resolution, 0.3-megapixel front-facing camera while the other two new RAZR models have 1.3-megapixel front cameras.

During a demonstration at Wednesday’s press event a Droid RAZR HD unit provided remarkably sharp and smooth HD video playback even with bright ambient light. As expected, the new RAZR models are thin. The RAZR M comes in just under a third of an inch, the RAZR HD is just over a third of an inch thick and the RAZR MAXX HD is slightly fatter at 0.37 inches thick.

Woodside noted that not only will all of  the new RAZR phones be upgraded from Android 4.0 (Ice Cream Sandwich) to Android 4.1 (Jelly Bean) later this year, but added that all Motorola smartphones capable of handling the new software will get it as well. Owners of Motorola smartphones that can’t be upgraded to Jelly Bean can get a $100 credit toward a new phone, he said. 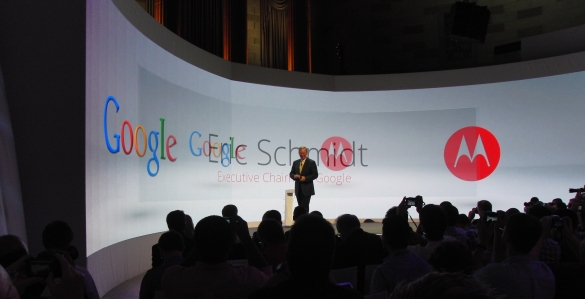 “They really shouldn’t be called smartphones, they should be called mobile computers,” said Google CEO Eric Schmidt, who led off the press event.

How will the new RAZR entries compete with the Samung Galaxy S3, the current and future Apple iPhone and recent entries from Nokia, LG, HTC and others? The holiday shopping season will provide the answer soon enough.