The Echo by Kyocera for Sprint is exactly what it looks like: An Android smartphone with two screens instead of one. Does the extra screen improve your productivity or does it just suck battery power? Yes. But that’s OK: Batteries (two of them) are included.

The Echo was unveiled Monday at a glitzy event in New York which featured the magic of David Blaine. While the phone lacks smoke or mirrors, it does feature a specially designed hinge that allows it to snap quickly from single- to dual-screen mode.

The Kyocera unit’s dual 3.5-inch touch displays can be used in tandem or separately in either portrait or landscape orientation. The phone will sell for $199 after a $100 rebate with a two-year plan.

The unit is only a 3G phone, however, and can’t use Sprint’s ultra-fast 4G network

. It can, however, serve as a Wi-Fi hotspot for a notebook or other wireless networking device.

During the press event Sprint representatives demonstrated how the Echo’s screens can be used to run separate applications in each screen or run a single app that spans both screens. When reading e-mail, for example, you can read the e-mail summary in one window and read the full e-mail text in the other. You could also, for example, open your Twitter account in one window and peek at Facebook in the other.

The phone can also run games, as Sprint representatives demonstrated as they showed off a version of The Sims that took advantage of both screens (see video below).

As for the specs, the phone comes with Android version 2.2, a 1GHz Snapdragon processor, an 8GB removable memory card (up to 32GB cards supported), Bluetooth 2.1 support for wireless headsets and other devices, and a five-megapixel camera with support for 720p HD video.

Due to the power demands of the dual 800-by-480-pixel screens, the phone comes with two 1,370 mAh batteries and an external battery charger that can connect to the phone, thus allowing you to charge both batteries at once. As for battery life, neither Sprint nor Kyocera mention this prominently on their product pages, so you’d be advised to keep the batteries charged and the charger handy.

At 6.8 ounces and two-thirds of an inch thick, the unit is both thicker and heavier than the original Motorola Droid

with the slide-out keyboard (6 ounces, half-inch thick). In other words, the unit has a bit of heft to it and will definitely fill out a shirt pocket.

Like Acer’s Iconia dual-screened notebook, it remains to be seen if two screens are better than one or if they just make the folks at Con Edison smile.

During a press conference last week for the newly announced Samsung Galaxy Tab, Kevin Lynch, chief technology officer at Adobe, showed off how the Android-based tablet can do something Apple’s iPad

During the Samsung press event in New York, Lynch showed how the tablet handled the video-heavy Major League Baseball website and a couple of Harry Potter online games.

The Galaxy Tab will debut with AT&T, Sprint, T-Mobile and Verizon and a Wi-Fi-only version will be available later. The unit weighs well under a pound, has a 1GHz Hummingbird processor, 16GB of internal memory (expandable with memory cards), and a 7-inch screen.

Want to see more? My video of the Galaxy Tab in action is available at PC World.

With the introduction of the Samsung Galaxy S smartphone at a lavish launch event in New York this week, Samsung claims the lead in smartphone display technology. So how nice is the 4-inch, Super AMOLED display? Very nice indeed, even in bright sunlight.

Not only is the display bright and rich, but video playback is more than impressive, rendering even action movies with a jitter. Combined with a 1GHz processor, the Galaxy S handles high-definition videos very well. Take a look at how nice the movie “Avatar” comes across on the small screen. The entire movie comes with the phone on a removable memory card.
The Galaxy S is known as the T-Mobile Vibrant

and the Sprint Epic 4G

, which, unlike the other three, has a slide-out QWERTY keypad.

What else do I think? See my first impressions at PC World.
Copyright 2010 Stadium Circle Features

If you get your hands on the new HTC Evo 4G cell phone for Sprint and you’re not impressed with its 4.3-inch display, solid feel and sleek lines, just remove the battery cover. The engineering inside is just as elegant as it is outside. Even its battery is color-matched to its innards.

At a splashy press event in New York Wednesday, Sprint introduced the HTC Evo 4G, the first 4G cell phone to come to market in the U.S. The unit ($199.99 after a $100 rebate and with a two-year service agreement) arrives at Sprint stores on June 4. According to Sprint representatives, 4G data service is up to ten times faster than today’s 3G networks, like the one used by the Apple iPhone 3G S

.
One thing that didn’t arrive in New York with the May 12 launch event, however, was the 4G network. While Sprint’s 4G service is already available in Atlanta, Baltimore, Chicago, Houston, Las Vegas, Philadelphia, Seattle and a handful of other cities, New York is listed as “soon.” However a temporary 4G cell was set up near the event site so that the 4G features of the phone could be demonstrated to the press.
Sprint officials said that since they knew that 4G coverage would be spotty for some time, the goal in creating the Evo 4G was to create the best possible 3G phone–with 4G capabilities. Also, since the 4G circuitry is rather power hungry, most users would not want to leave the 4G capability on all the time, the Sprint officials said.

“If you’re going to build a great product for 4G, you better have a large display,” said David Owens, vice president of consumer marketing for Sprint in a meeting before the press event. “This will impact gaming, as you will see.”

Indeed, the bright, 4.3-inch display is stunning. Combined with the unit’s one-gigahertz processor, high-quality YouTube videos run smoothly and without audio problems. While the HTC Evo 4G isn’t the first cell phone with a front-facing webcam (the Pharos Traveler 137

, introduced in 2009, is one example), the combination of the 1.3-megapixel webcam with an 8-megapixel, back-mounted digital camera makes the HTC Evo 4G a rather formidable communications and image-recording tool for both casual and professional use.

“I see more utility in this than I see in a netbook,” said Owens, who also noted that the phone can used as mobile Wi-Fi hotspot for other devices.

Included among the preloaded Android applications is Google Goggles, an interesting utility that makes good use of the phone’s camera and Google’s archive of images. Point the camera at an object or a photo and the software will try to figure out what it is. During the press event, the phone successfully recognized a photo of the Guggenheim Museum (see video).
Also preloaded on the HTC Evo 4G is Qik, a service which lets you stream live videos from your phone. However if you enable an upgrade to the software, you can use Qik to engage in live video chats with other mobile devices or with desktop computers. An attempt to demonstrate the utility on stage at the press event failed quietly (see video), but the Qik app worked perfectly when shown off at a demonstration table afterward.

At a price just under $200 and with data plans that are significantly cheaper than those of other major carriers, the HTC Evo 4G may quickly evolve into a true competitor to other top-shelf cell phones like iPhone 3G S, Google Nexus

, and Motorola Droid. Only time, and the speed of the growth of Sprint’s 4G network, will tell.

Take a small slice from the gigantic International Consumer Electronics Show, bring it to Washington, D.C., invite the press and members of Congress and what do you get? CES on the Hill, a surprisingly interesting and busy event held at Washington’s historic Eastern Market Tuesday.
Not only did the Consumer Electronics Association bring dozens of high- and low-ranking Capitol Hill officials to the Eastern Market, it also left something behind: $8,500 worth of Ethernet jacks and cabling.

During a brief interview, Gary Shapiro, president and CEO of the CEA, noted that when rescheduling the event from the Russell Senate Office Building to the Eastern Market for space and other reasons, the CEA discovered that the Eastern Market’s North Hall had wireless Internet connectivity, but no Ethernet jacks for exhibitors who needed them for security or bandwidth reasons.
The CEA, he said, decided to correct the problem itself: It donated $8,500 to the District of Columbia to install the needed hardware, which will now be available to future renters of the site.

On Tuesday the crowded hall was filled with gadgets and technology demonstrations from familiar CES exhibitors such as Samsung, Microsoft, XStreamHD, Kodak, Audiovox, Qualcomm, and Panasonic. 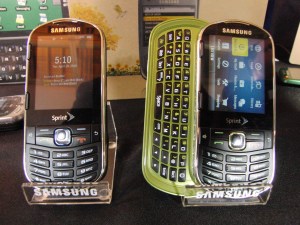 For example, Samsung showed off its new Restore, a handset built with 84 percent recyclable materials. To no one’s surprise, the phone does not include a paper manual (it’s available online) and what little packaging it has is 100 percent recyclable and made from 70 percent recycled material.
The unit has a standard phone keypad as well as a slide-out QWERTY keypad. Also included is a two-megapixel digital camera and camcorder, a microSD slot for removable memory cards with capacities up to 32 gigabytes, stereo Bluetooth support and an MP3 music player. Also bundled with the 4.3-ounce phone is Sprint Navigation for turn-by-turn driving directions. The handset will be available from Sprint in the summer.

Are you eco-conscious? Do you care what your cell phone is made of? Sprint certainly hopes so.
Last week, at a well-attended press event at the Cooper-Hewitt, National Design Museum in Manhattan, Sprint introduced the Samsung Reclaim, a phone made of 80 per cent recyclable material. Two dollars from each purchase goes to the Nature Conservancy’s Adopt an Acre program.
How does it rate? Read my review at PCWorld.com.